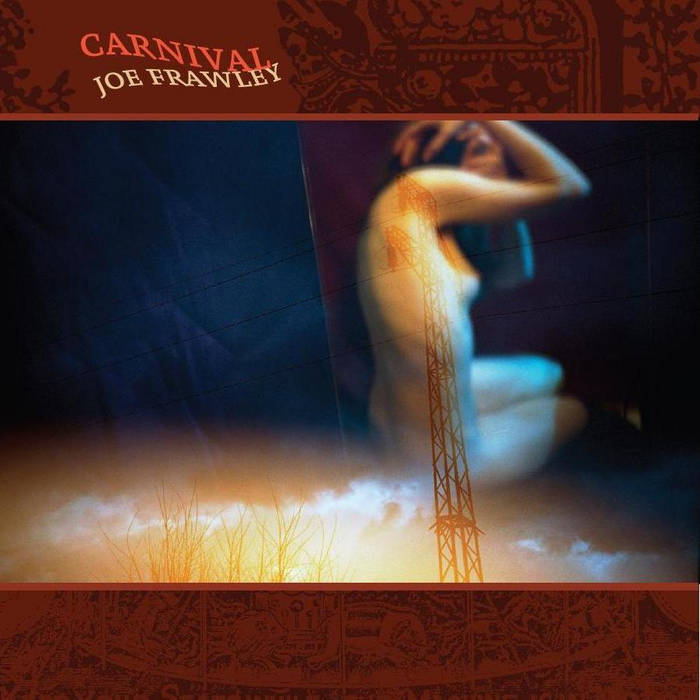 lust4metal interesting atmospheric collages of samples and instrumentation marred only by being a bit repetitive Favorite track: A sleepwalker's vocabulary.

I think it was... two years ago?, a year ago, I think, maybe. I went to kind of a carnival, and there were fortunetellers and psychics in these little booths and stuff. So, of course, I wanted to go get my fortune read, and, in one of the tents, one of the ladies told me I had some unknown, divine power that I hadn't discovered yet.


****
REVIEW
( Heathen Harvest, Dec. 2011 heathenharvest.org/2011/12/30/joe-frawley-carnival/ )
The last time we heard from Joe Frawley was early on in 2010 when his album “Emperor of Daffodils” struck a nerve with our then-journalist Henry Lauer. That experimental work of found sound, synth, piano , voice and dark electronic arrangements created an unbiased view into the world of superficial extremes of the modern female teenager. The nerve that was struck laid in Frawley’s inability to show any kind of personal opinion for the subject, opting rather to serve as a voyeuristic vehicle in which to approach the subject. As strange a subject matter as this was for a work of modern classical and dark ambient music, it makes it nearly impossible in theme to top. Realistically, it was a subject that we’d normally only see from power electronics artists like Whitehouse, though they’d obviously take the side that is more confrontational towards society’s natural opinions.

Today, however, we find Frawley creating a work that is more subdued in theme — a supernaturally themed album that utilizes the instruments and voices at his disposal to create an uncomfortable atmosphere that, again seems to partially base itself on the young female character, but in a way that doesn’t beg for debate or philosophical conversation. Primarily it’s the one-way conversation that comes up repeatedly in the album: “I think it was… two years ago?, a year ago, I think, maybe. I went to kind of a carnival, and there were fortunetellers and psychics in these little booths and stuff. So, of course, I wanted to go get my fortune read, and, in one of the tents, one of the ladies told me I had some unknown, divine power that I hadn’t discovered yet.” Obviously it’s not a matter of word, but the bubbley, poppy voice that speaks it surrounded by the dark layers that Frawley creates. The vague and cryptic French poetry of Premonition I doesn’t help this idea, speaking of “A photograph of a body, your wrists to your ankles. You want it. You wish…” This is just a subconscious lower layer of the music though that ties into the previously mentioned “Emperor of Daffodils”. Musically, the music doesn’t seem to operate on a chronological timeline — rather, it appears to be more like a fractal memory — seeking back into someone’s mind for a specific event. The music operates in segments within each track that often filter around, cut back, or simply abruptly begin anew all together before evolving into another segment. Simple background, pulsating drones meet with haunting female musings, gentle synths, and experimental sound to create the backdrop of most tracks. And, frankly, its the bubbley character of the spoken word by Mélanie Skriabine that cuts through the music and makes it so uncomfortable.

The music takes on a brief, sentimental edge towards the end of “A Sleepwalker’s Vocabulary”. A voice whispers in a melancholy tone “I had something I wanted to tell you”, as the darkness disappears for a short while, giving way to a minimal, slow tempo’d piano composition. This is one of the few moments that pull at the listener’s emotions in this release, and its so brief that it leaves you wishing for more — but Premonition II doesn’t have much to offer in the way of satisfaction to that need. The track is a blipped, experimental march of more segmented and fractured scenes, puzzle pieces mixed together sonically, with your mind being the only hands frantically seeking to place them in order. Most of the remainded of the album falls into this chaotic category with the exception of “Premonition III”, which, while still retaining an uncomfortable atmosphere, is largely traditional in its neoclassic approach to dark ambient when compared to its predecessors. Sweeping synth lines, minimal horns distorted with reverb hide in the background, heralding the end of the album.

The music on “Carnival” took on a more foreboding nature than that from the first album that I’ve reviewed by Frawley, “A Book of Dreams”. As memory serves, that release was more contemporary and only hints at the uniqueness that Frawley has discovered since. As many of the songs took on similar structures regarding the fractured approach, it’s hard to give the album a perfect rating. After all, it is experimental in nature, so being uniform as an entity doesn’t improve its’ overall mood, but as the music is thoughtfully composed and followed by modest production, as well as pushing boundaries, it deserves a high score.